púca in the machine

Niamh Fahy is an artist specialising in Print and photography , currently based in Bristol, her practice explores ideas of transformation, connection and absence. Her work begins with a physical connection to landscape and the embodied experience. Sensual and instinctive, her visual language veils, interrupts, blurs and reveals layers of information from the landscapes interior. She examines dichotomies of movement and stillness, silence and noise, harmony and dissonance, alluding to the continuously changing cycles of landscape and deep time. She reconsiders the connection between the solid and the fragmented, what is now separated was once connected, what was once the deepest ocean now forms the highest peak. 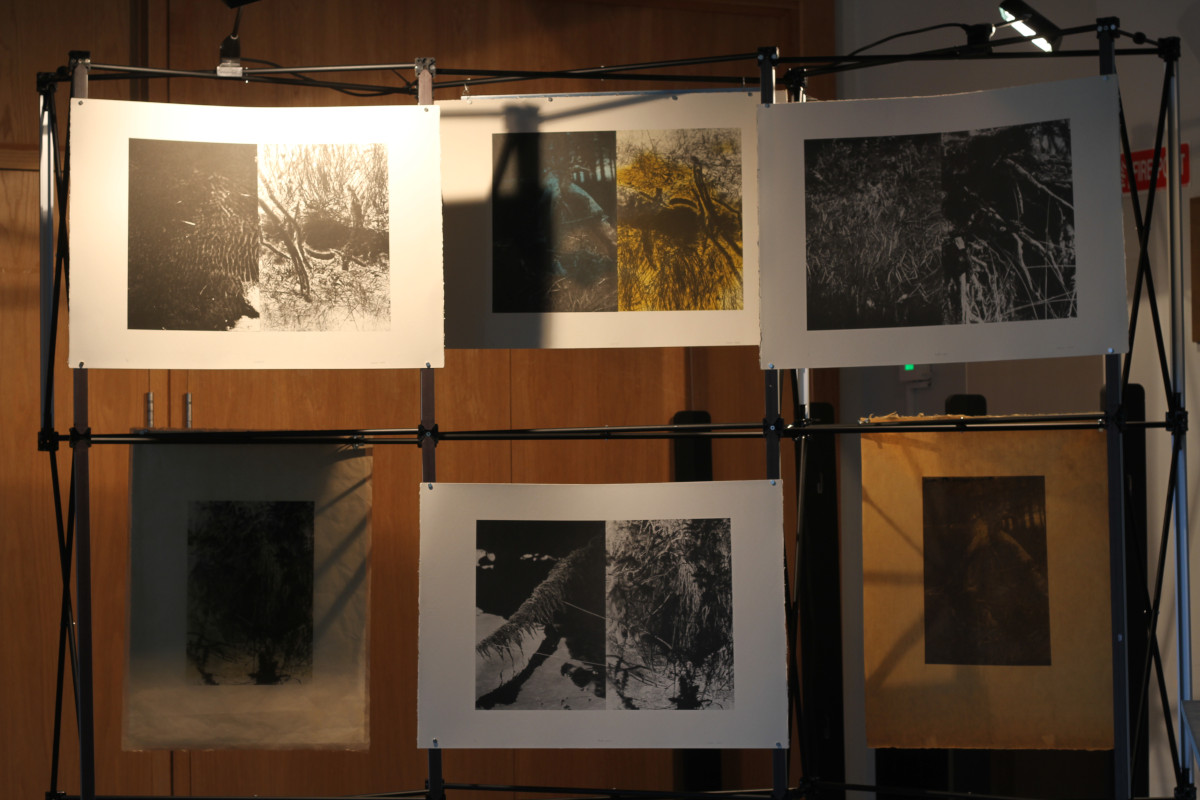 Shane makes nothing alone and always collaborates, most recently working with ecologists, sheep, fungi, epidemiologists, artists, historians and bacteria. He is coordinating this three-artist project, Púca in the Machine 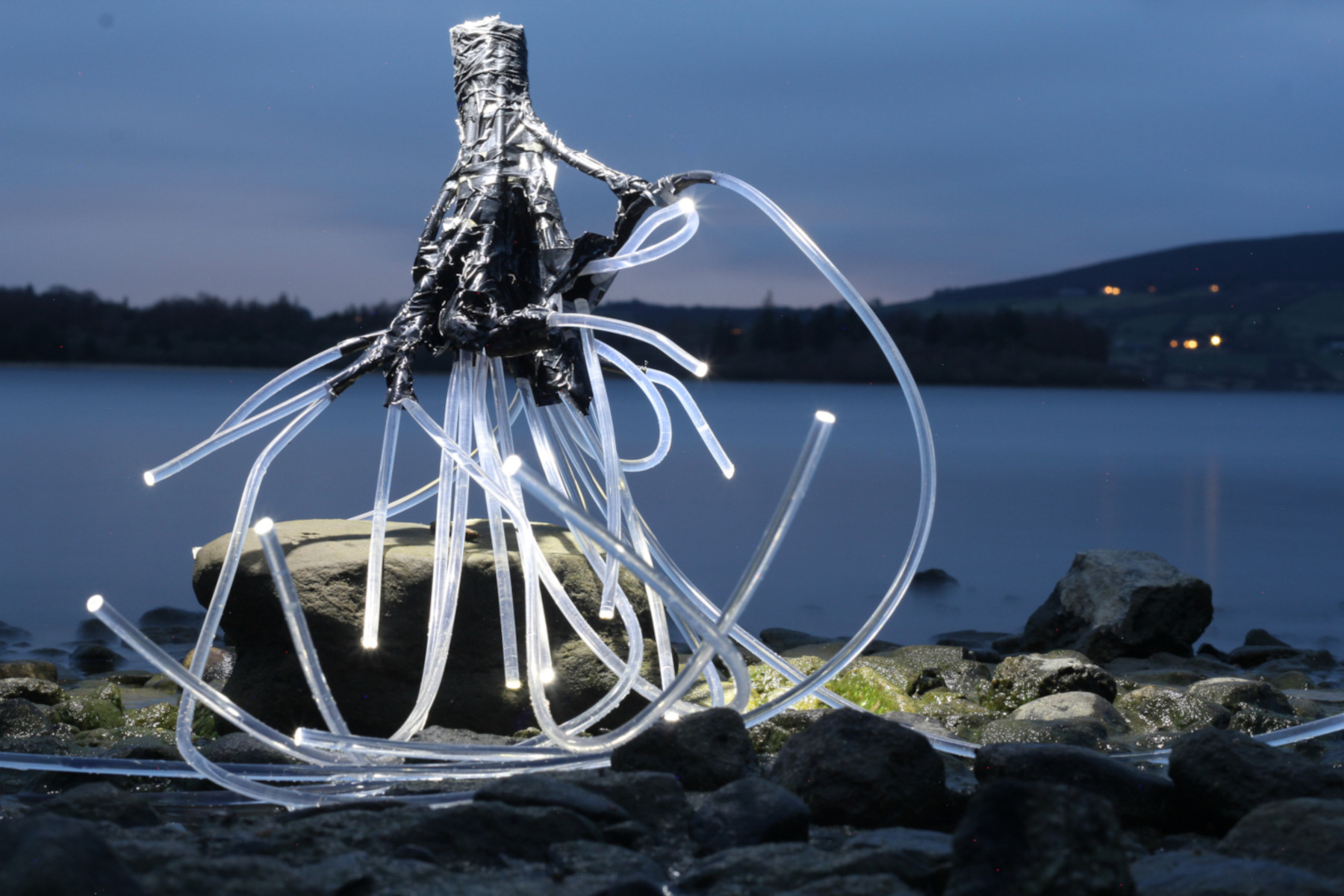 "I believe that myth is truer than history. I believe that the artistic process is visionary, that artistic investigations into the nature of reality have the potential to prepare the way for scientific discoveries. In the words of James Baldwin, ‘The purpose of art is to lay bare the questions which have been hidden by the answers.’

With this belief at the helm of my practice, I allow myself to be immersed in my surroundings and to work intuitively. Elements of my environment inevitably find their way into my work, be they suburban cityscapes, tangled hedgerows, children’s toys, or furniture and domestic objects. What recurs with persistence is a reference to man’s relationship to nature, an interrogation into how both man and language are characterised by the landscape and vice versa." 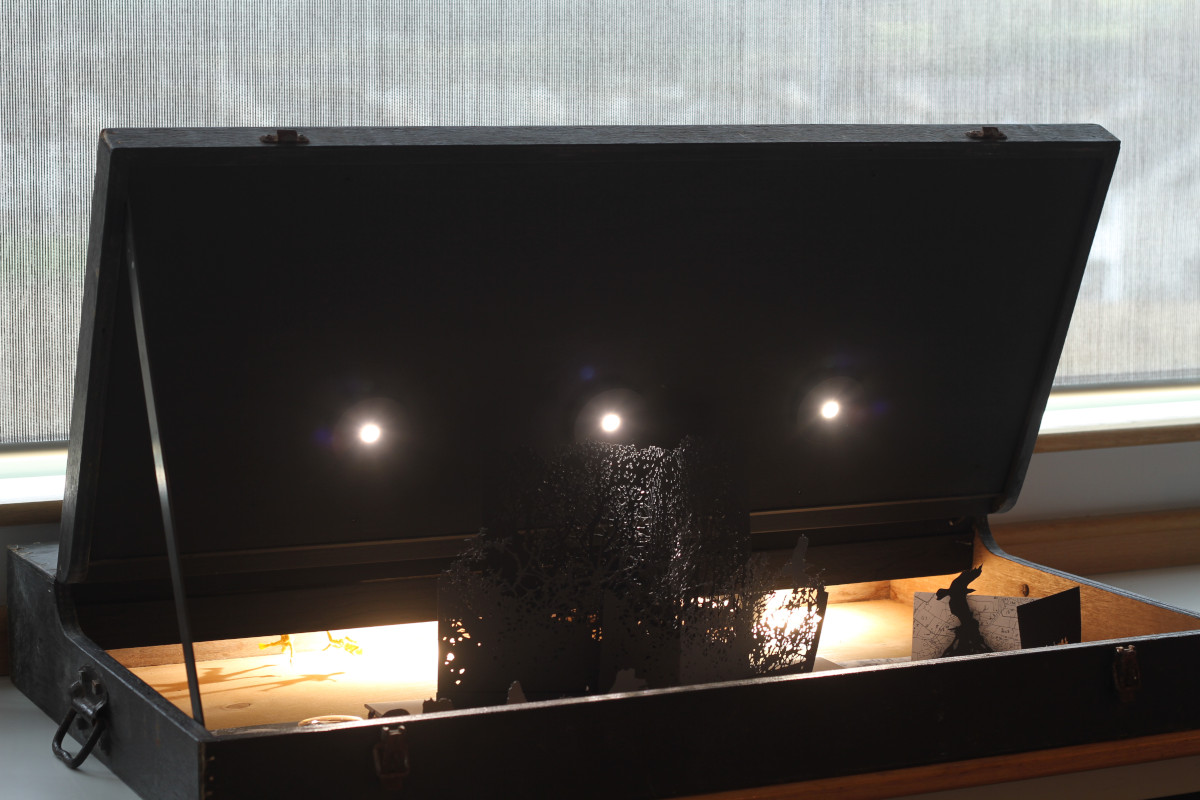 The launch was a booked out event, where guests were treated to a talk by all three artists at Blessington Library.

Some images from the exhibition are below. 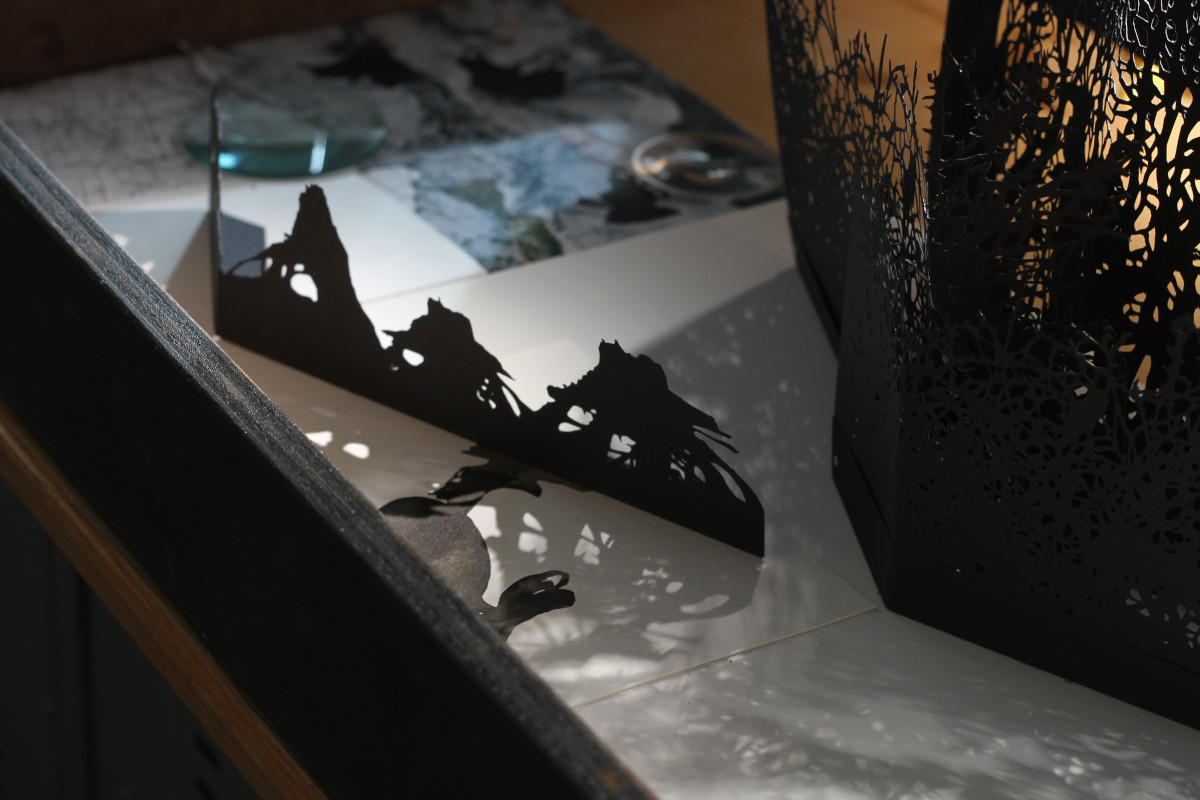 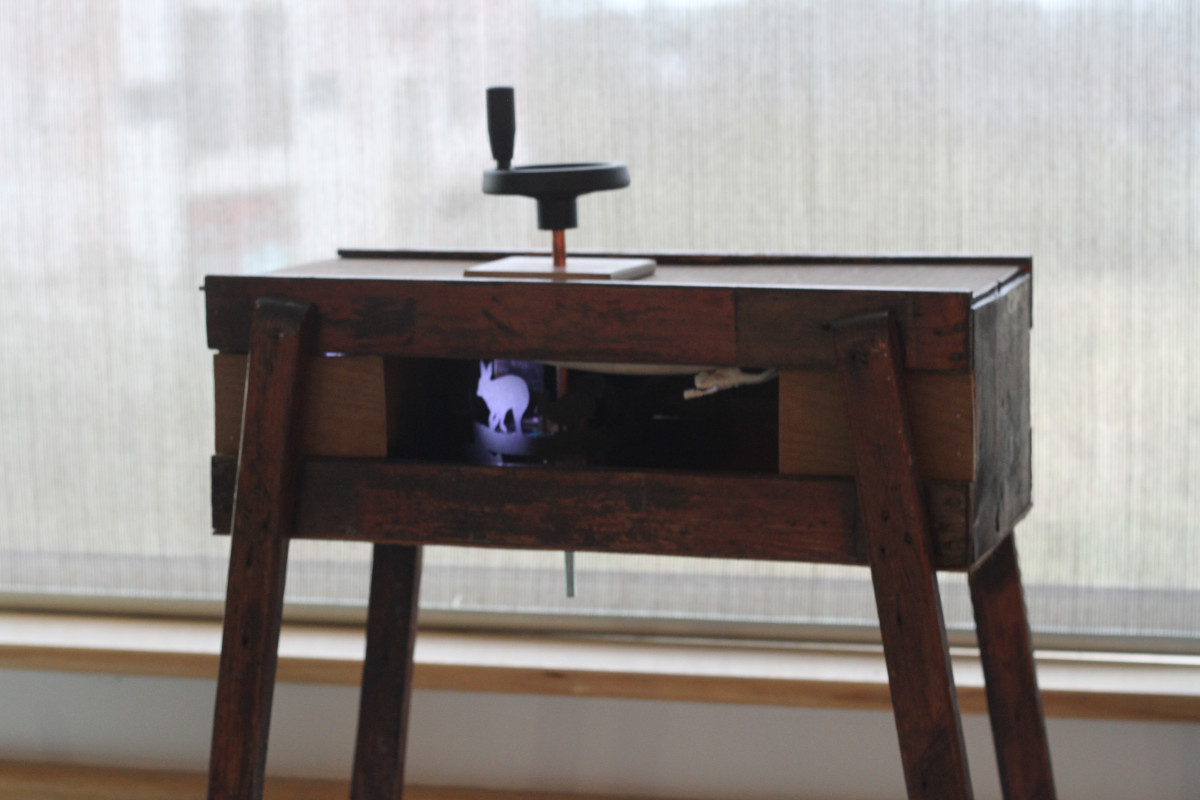 Alannah Robins The Water Was The Sheriff (2022) [above] 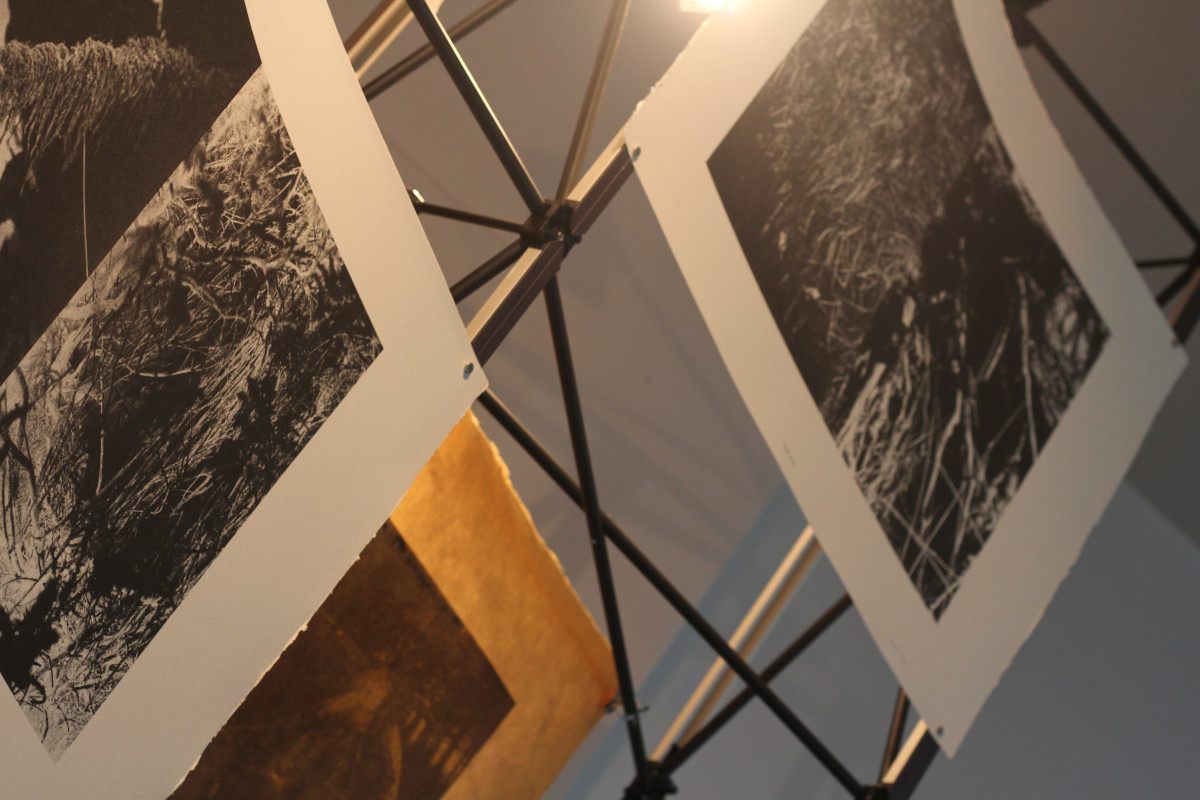 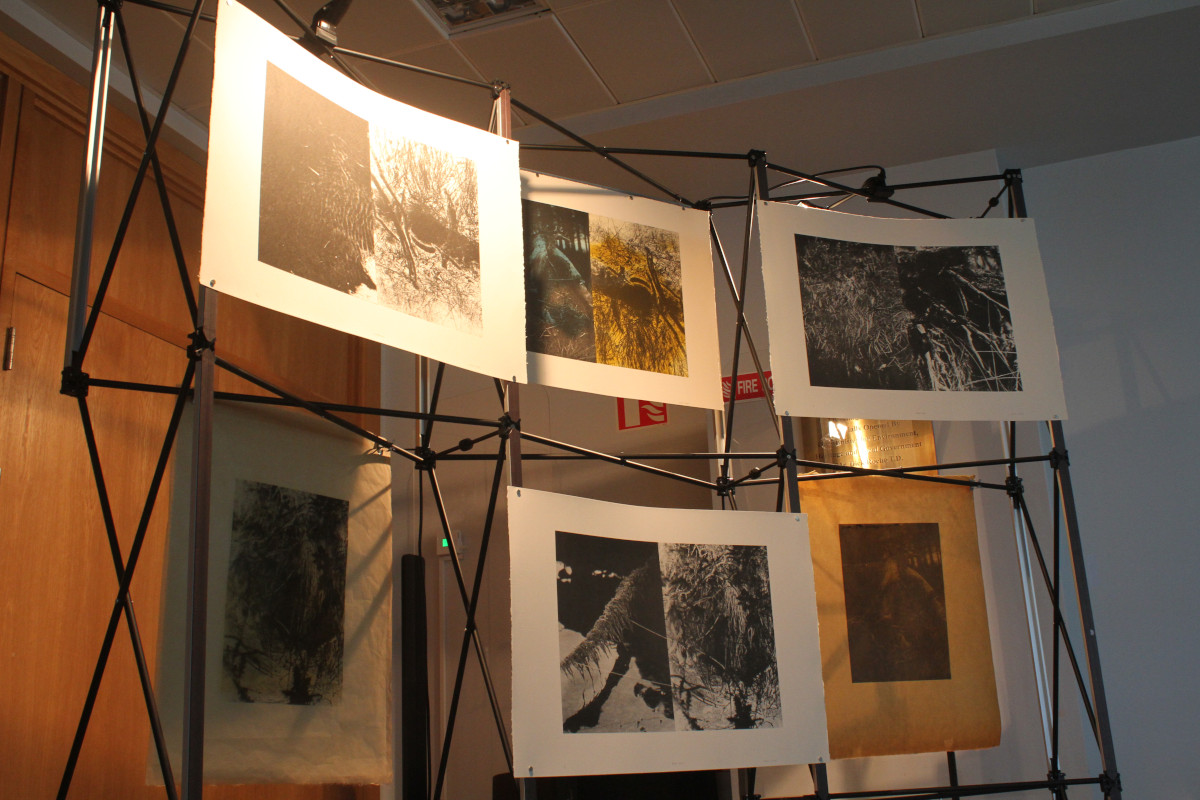 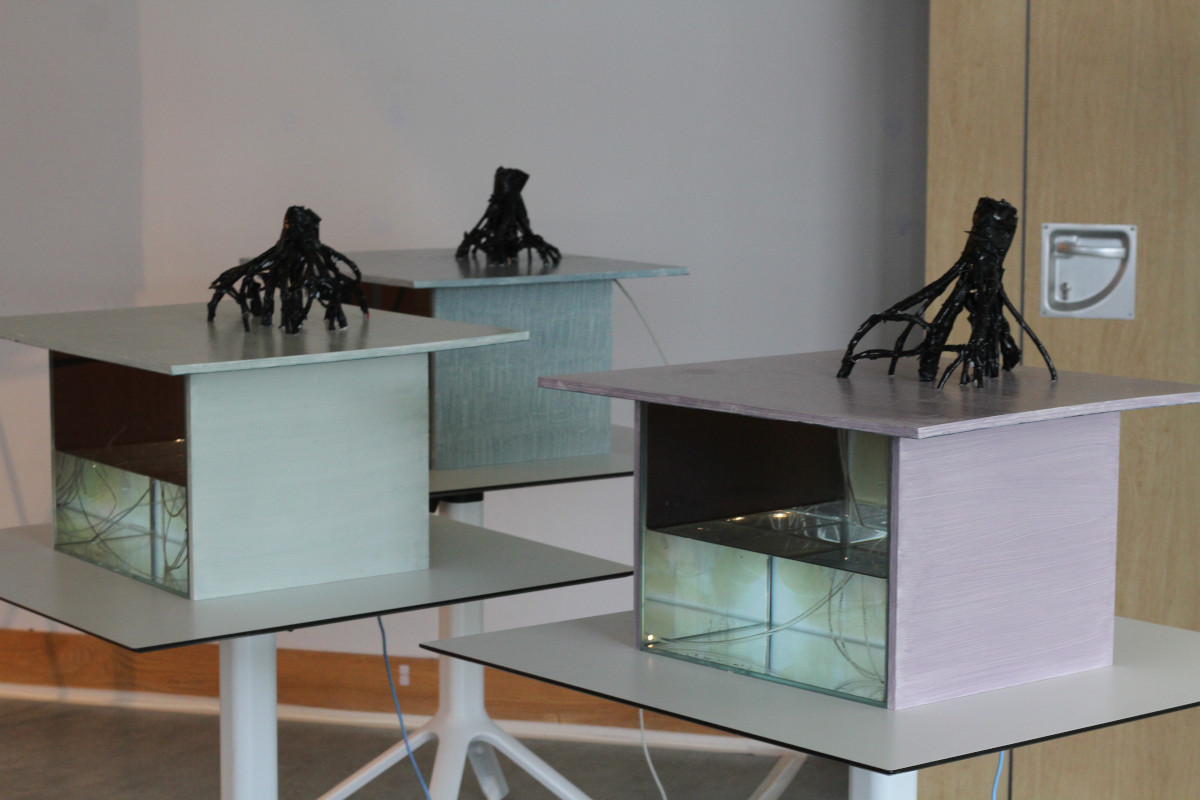 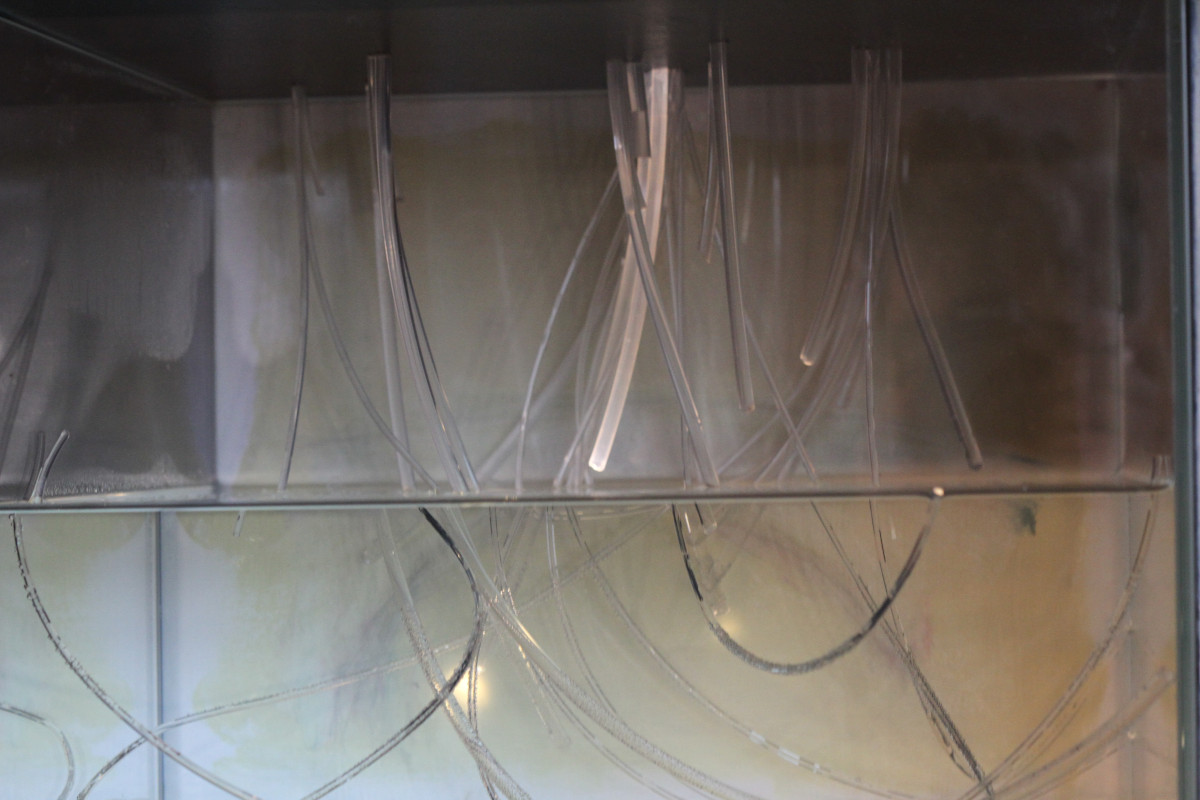 In the 1930s in west Wicklow, Ireland, the rivers in the area of Poulaphuca were dammed and the valley flooded to create a new hydroelectric power station. The station, still in operation today, represented a major engineering project in the young Irish Free State. The human residents of the valley were evicted prior to the flooding, and given compensation that the state calculated as more than reasonable. Yet displacement causes more than monetary suffering and any uprooting of lives can have long-term emotional and social consequences. Writing around the same time as the valley was being submerged, Simone Weil recognised how uprooting people en masse can have dangerous and long-lasting repercussions, especially where a long-term rootedness had been established and where removal is forced (Weil, 1948). Writing mostly about France’s position during World War II, her acute understanding of the social connection to urban and rural place preceded the social geography of the 1970s and 80s (Tuan 1978, de Certeau 1984), but it was at this later stage that urban planners and philosophers began to see the social and psychological impact of major changes to place (Albrecht 2019). The voices of those evicted people at Poulaphuca and the stories of those evictions have been recorded in numerous histories, including in a large-format photographic publication (Corlett 2002), a documentary film by Irish national broadcaster RTÉ, and many other publications, events and documents.

Unrecorded voices from beneath the reservoir include nonhuman and more-than-human presences in the valley. In undertaking such a massive engineering project, homes of many critters were inevitably destroyed. Rodents, birds, insects and fungi were among those evicted. Farm animals, bacteria, parasites and others accompanied humans to new places. These evictions were uncompensated. Also among the casualties were many trees that lined the walls of old estates and roads, leaving haunting stumps that were soon submerged, and that today have had the soil around their roots eroded to create monstrous objects that I have chosen to call Snámhaire, translated into “creeping things”.

In the 21st Century, we have begun to understand the importance of complex ecological entanglements that affect human, environmental and technological development (Haraway 2017). While technology and human become more entangled, it is easy to forget the nonhuman that is also affected (Puig de la Bellacasa 2017); however, these critters have voices even if they are often unacknowledged or misappropriated (Despret, 2017).

Local lore tells that the púca, a trickster character in Irish mythology, lives in the form of a metre-long pike in the King’s River, one of those that was flooded. The púca is mischievous, occasionally malicious, and on a rare occasion helpful to travelers. As a shapeshifting character of the “other realm”, the púca has little material interest in the day-to-day lives of humans. Today, the púca-as-pike’s area of roaming is the much larger expanse of Blessington Lakes, and perhaps with the otherworldly nature of electricity the púca can move further still through the wires and cables of the generating station, out into the national grid. We have no way of predicting what this free reign might cause, or might have caused.

In 2022, we present Púca in The Machine, an exploratory collaboration between three artists, coordinated by Shane Finan. The artists are Alannah Robins (mixed media, Interface Inagh, Galway, Ireland), Niamh Fahy (print and photography, University of the West of England, Bristol) and Finan (interactive digital media, Valleymount). The three artists have worked on new interpretations, creating artworks that respond to the unique and unusual history, mythology and ecology of the Poulaphuca Reservoir.

Fahy’s responses have explored the edges and borders of the lake, where the shore meets the water and what this boundary suggests. The boundary is, of course, manufactured, but real enough to create two spaces of existence, and this is what Alannah Robins has created work in response to, seeing the submerged space as a past, present and future narrative of nonhuman life. Finan’s work straddles these ideas, drawing from myth and many walks on the lake shore observing the colours, forms and lives that exist in and around it.

Artworks will exhibit for the first time at Blessington Library, opening on February 17th 2022 and running until March 5th 2022 before touring to other venues in Ireland.

The work has been supported by Wicklow Arts Office and Blessington Library.

publication to be launched documenting research stage of the project on 3rd March 2022 at Blessington Library.

To book tickets to the launch follow this link.

written as part of a nature writing course with Chelsea Steinauer-Scudder delivered by Emergence Magazine, in 2020


They warned the residents in the valley. Even with the warning, some refused to leave. There is a story of a man who barricaded himself into his one-room cottage, threatening and insulting the state workers who came to offer help moving him on. He had seen generations grow old in those buildings. The water had risen to his ankles before he was finally, forcibly removed.

They were given new homes. Modern buildings that had conveniences never dreamed of in the valley. Even so, a sense of place is hard to detach, and these people knew nothing else. To lose your home, even when offered one that appears better, is to suffer grief. 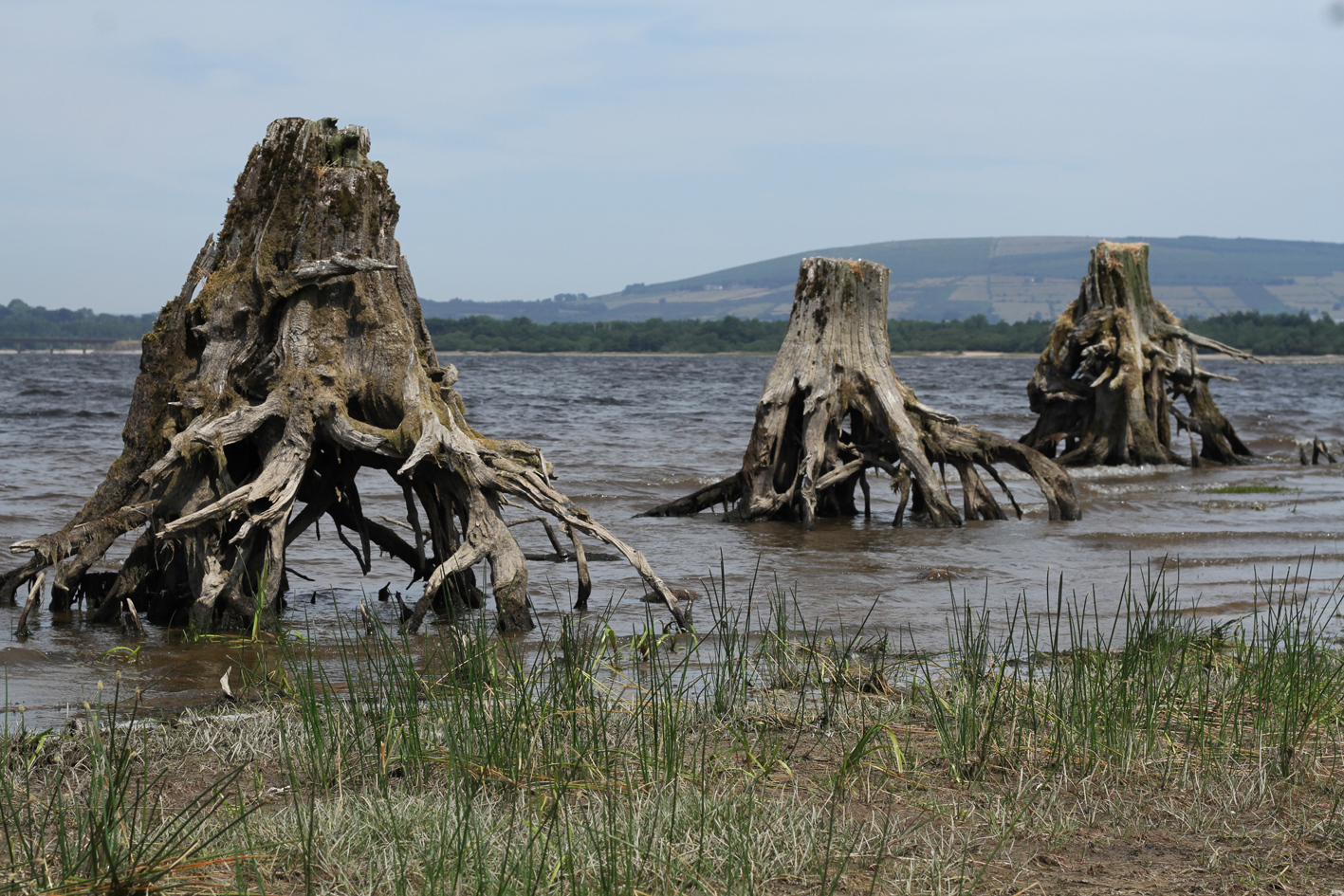 The houses had to be taken down, stone by stone, and dethatched, to protect the bottom of future boats on the future lake. The trees, too, were a risk, with their high branches a perceived danger to workers who will come onto the water. They were cut straight, every single one, the valley soon becoming a graveyard with trunk stumps marking the demise of themselves. They had no warning, but perhaps this was better than suffocating, drowning under the slowly filling water. We cannot ask them now.

People playing god created the rain, the waves, the lakes. Nearby, electrical lights blinked on for the first time. Progress and comfort, and a valley immersed. 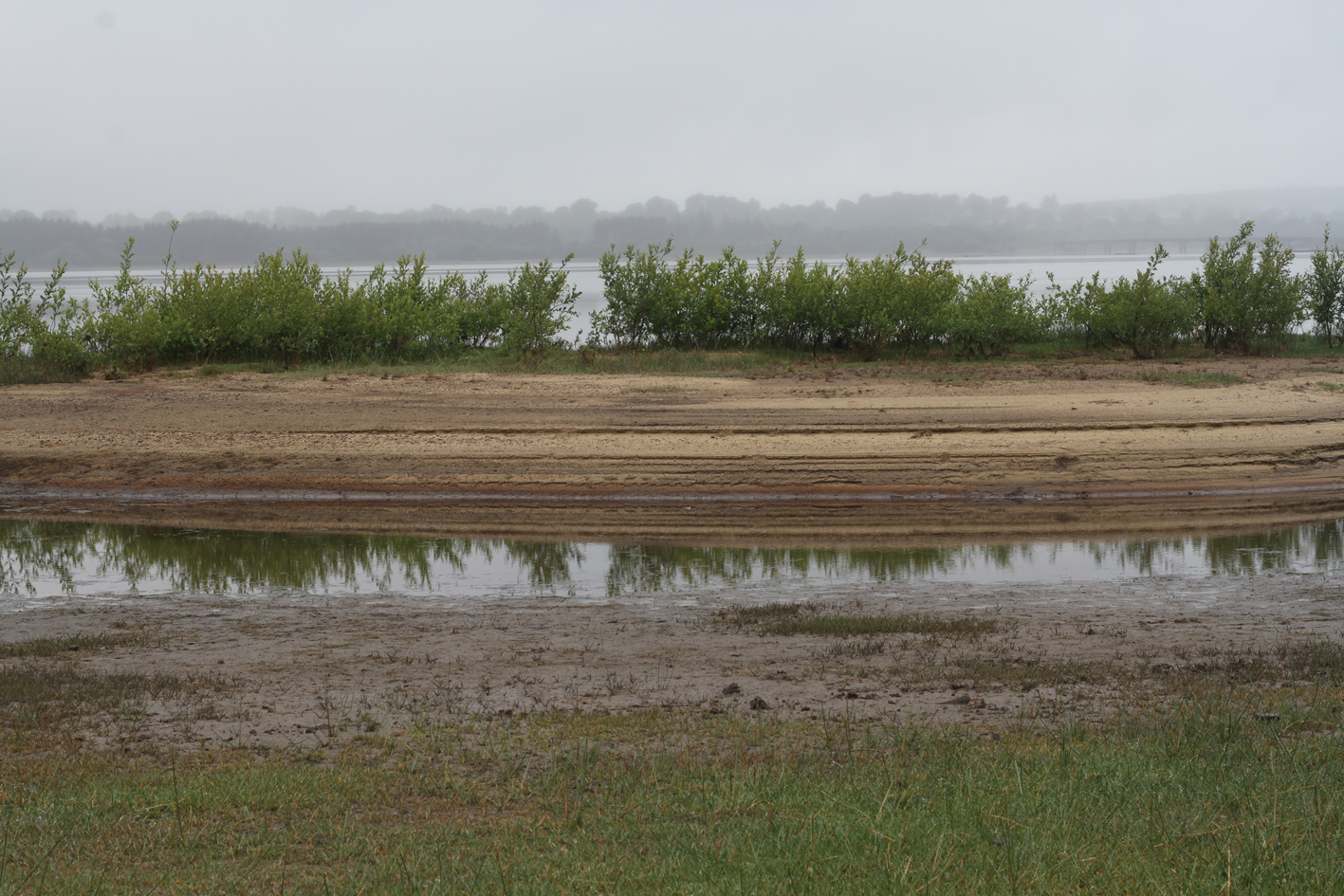 The other residents had no warning. The nests above had at least been suddenly moved on – no choice there! Time to go! But for the soil and surface dwellers: the mice, the rabbits, the spiders, the hares, the badgers, the beetles, the foxes; the floods come as a trickle. Steady. They sought out higher ground, taking with them only what they could carry.

In other places, across the sea, a human-made war raged. The other residents had no choice in that either, suddenly expunged by bombs dropped, suffocated by DMT clouds, or crushed under rolling wheels. Countless white crosses in mute witness stand: one for every ten birds.

Today, countless calcified stumps stand on tiptoes of roots, the soil eroded away around the tentacles, hard as rock and embedded deep in the shale. In times of drought they emerge, one by one, as a reminder. The graveyard surfaces. First the stumps, then the stone walls and roads. The memories don’t stay buried. 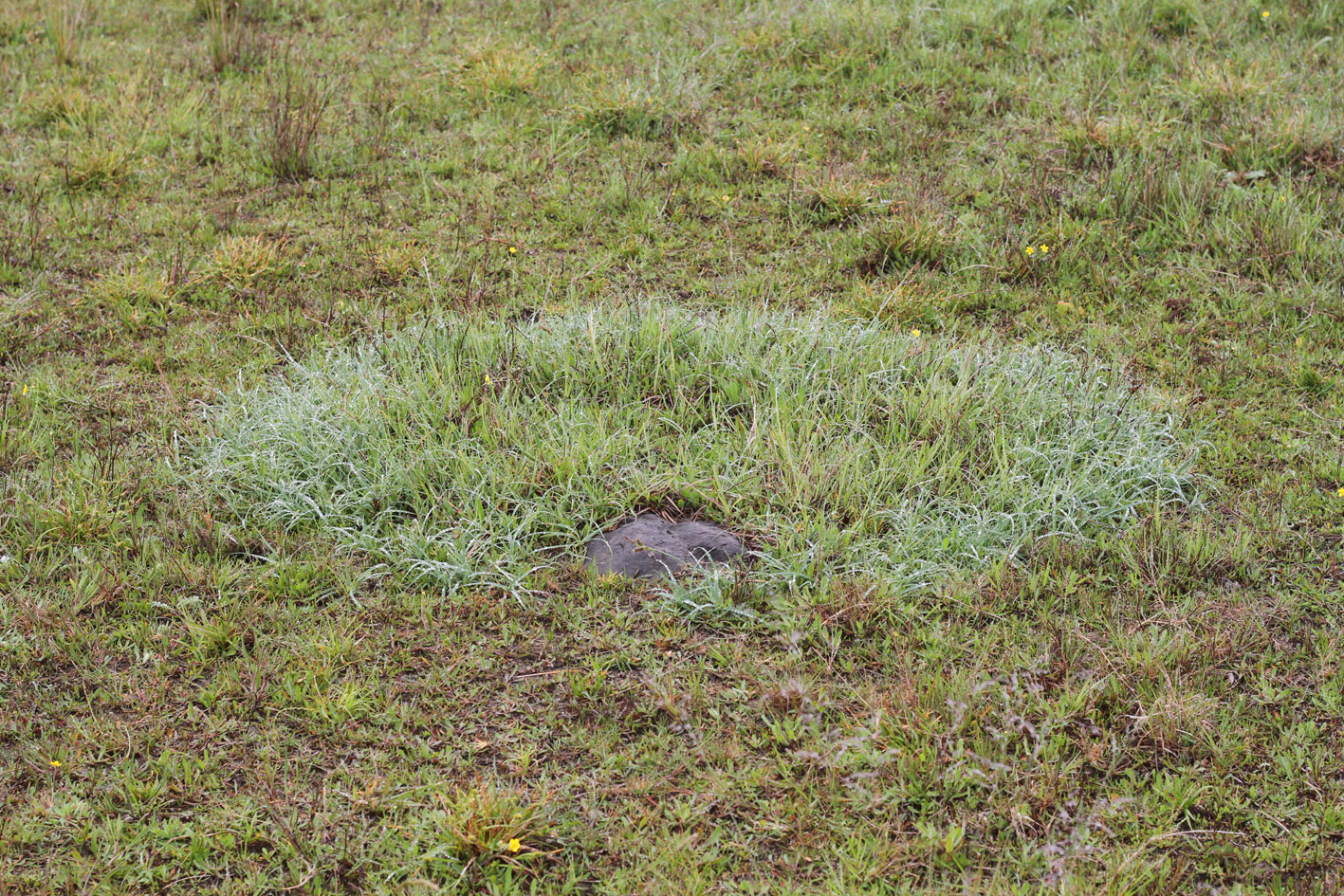 But the sets and burrows are long since filled by swirling waves. Sandy soil filling every crevice. Their homes reveal no archaeological record. Maybe somewhere, when the lake floor reappears, in symbols we don’t recognise, we can memorialise them. A patch of grass that is a touch too green. A swirl of sand that moves anti-clockwise. And there, to the trained eye, we can remember the spirit that once lived under the soil.

Flooded too are the legends. Drowned. But the púca can move freely now where it couldn’t before. Once confined to the river in the body of a pike, now it can swim to and fro in the valley. It can tap into the power supply at the dam – a mischief that spreads with progress. And who are we to stop it?

Progress, progress, comes at a cost. But was it ever measured? 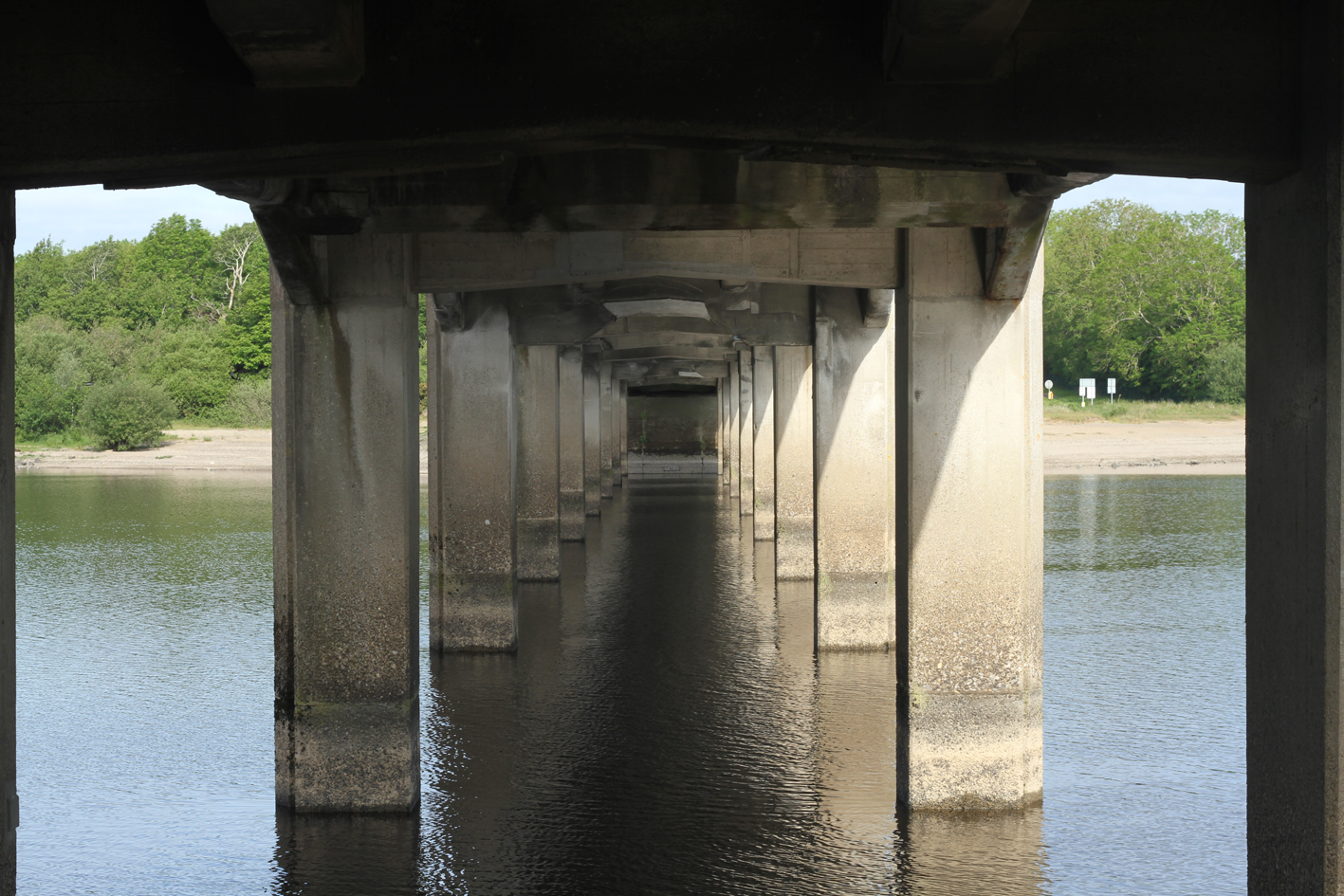